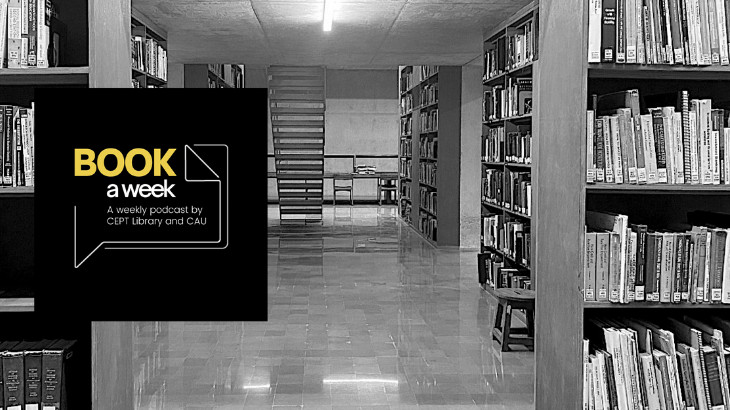 Book-a-Week is a weekly podcast in an author-interview format featuring new books on architecture and cities published in the last five years.

The Unfinished: The Stone Carvers at Work in the Indian Subcontinent

‘The Unfinished: Stone carvers at work in the Indian Subcontinent’ by Professor Vidya Dehejia and Peter Rockwell, is an exploration of the notions of ‘completeness’ in the context of construction of stone monuments of India. In this podcast, Venugopal Maddipati talks to Professor Dehejia about the varying degrees of unfinished stone monuments across the country to reveal the stories and the decisions that resulted in these incomplete works.

Vidya Dehejia is Barbara Stoler Miller Professor of Indian and South Asian Art at Columbia University and a Padma Bhushan awardee. Her extensive work in the field of art history draws from her travels across South Asia, and her background in classical Sanskrit and Tamil. Her subjects have ranged from Buddhist art in its earliest centuries to the esoteric temples of North India and from the sacred bronzes of the south to the art of British India.

The Qutb Complex: The Minar, Mosque and Mehrauli

Delhi’s Qutb Complex is one of it’s most iconic sites that has encountered several changes since its inception to the present day. Catherine Asher’s book ‘The Qutb Complex: The Minar, Mosque and Mehrauli’ traces these historical changes by analysing the site’s monuments, patrons, inscriptions, and history. In this conversation, Sunaina Shah talks to Catherine about the modifications and appropriations that the site has undergone across several years of changing dynasties and political powers.

Catherine Asher is a specialist in Islamic and Indian art, well known for her work on the Mughal dynasty and the patronage of their Muslim and non-Muslim successors and predecessors. Her other interest is in the shrines that develop around deceased Sufi saints, and the appeal such complexes have for devotees. Her books include Architecture of Mughal India (2008), India before Europe (co-authored with Cynthia Talbot, 2006) and Perceptions of South Asia's Visual Past (1994).

Rajshree talks to Dr. Ghazala Jamil, author of ‘Accumulation by Segregation: Muslim Localities in Delhi’, published by the Oxford University Press in 2017. This book explores the processes of creation and articulation of social identities of Muslims in Delhi and spatial components of identification like residential segregation, interaction with public spaces and institutions; and the socio-political positionality of Muslims in the urban social fabric. It maps the landscape of discrimination in Delhi's neighbourhoods and analyzes how such fractured geographies are created. Ghazala Jamil is an Assistant Professor at the Centre for the Study of Law and Governance, Jawaharlal Nehru University, New Delhi. She has earlier taught at the Department of Social Work, University of Delhi, and School of Planning and Architecture, New Delhi. Her current research interests are around materiality and spatiality of culture, urbanism, minority rights, and subaltern feminism.

Sunaina Shah talks to Ebba Koch on her book titled ‘The Mughal Empire from Jahangir to Shah Jahan: Art, Architecture, Politics, Law and Literature’. The book is edited by Ebba in collaboration with Ali Anooshahr and published in 2019. It is a collective volume of articles written by 14 eminent scholars, and it takes a multidisciplinary approach to bring together historical, literary, architectural, and social studies in order to form a more nuanced multidisciplinary understanding of the least studied period of the Mughal empire in India; from the reign of Emperor Shah Jahan to his predecessor Jahangir. Dr. Ebba Koch is a leading scholar and an authority on architecture, art and court culture of the Mughals of South Asia and their connections to Central Asia, Iran and Europe. She has published extensively on the subject, and has taught at the Universities of Vienna, Oxford and Harvard.

From the Colonial to the Contemporary: Images, Iconography, Memories of Law in India's High Courts

Arul Paul talks to Dr. Rahela Khorakiwala, author of the book From the Colonial to the Contemporary: Images, Iconography, Memories, and Performances of Law in India's High Courts. In this book, Dr. Rahela traces the remnants of the colonial pasts apparent in the practice and performance of law in the high courts of India at Calcutta, Bombay and Madras. She argues that the iconographic identity of these courts helps preserve these historical notions of justice as evidenced in the contemporary perceptions of the court personnel.

Dr. Rahela Khorakiwala completed her MPhil/ PhD from Jawaharlal Nehru University in Delhi, and has, in the past, worked with the World Bank for a project in Kabul, the Ministry of External Affairs on an international maritime dispute, and the law offices of Federal & Company in Mumbai. Presently, she is a Senior Resident Fellow at Vidhi and leads the work for Vidhi Maharashtra. Dr. Rahela has several publications to her credit, including contributions to the Indian Law Review and the Asian Journal of Law and Society.

Sunaina talks to Ray Meekar, author and photographer of the book Building with Fire, published by the CEPT University Press. The book is a compilation of Meeker’s best studio ceramics, with some essays that accompanied his show catalogs. The title ‘Building with Fire,’ is meant to underline a technique where fire is introduced into the construction processes as ‘cement’, for bonding building elements together permanently.

Born in New York, Ray Meeker lives and works in Puducherry, India where he founded Golden Bridge Pottery (GBP) with Deborah Smith in 1971. Pottery has remained significant in Meeker’s prolific practice which ranges from modest utilitarian ceramics to monumental sculptural installations and kiln buildings/homes, a result of a fourteen-year experiment in developing fire stabilized mud buildings

Tereza Østbø Kuldova is a social anthropologist and Research Professor based at the Work Research Institute, Oslo Metropolitan University. She is the author of several books and edited volumes and is also the founder and editor in chief of the Journal of Extreme Anthropology.

Mathew A. Varghese is an Assistant Professor in the School of International Relations and Politics. He also serves on the editorial board of the Journal of Extreme Anthropology published from the University of Oslo. He currently engages in inquiries into unintentional design and co-species evolutions of the Anthropocene.

Rajshree talks to Rahul Mehrotra about his latest book ‘Working in Mumbai, RMA Architects’ published this year in 2021, by the CEPT University Press. The book is a critical reflection on thirty years of practice of RMA Architects and is structured into five segments, each referring to projects that address questions generated by the complexity of the design program, and also its context. Through this book, Rahul Mehrotra weaves a narrative to connect his various involvement in architectural practise since 1990, including teaching, research, documenting, writing, and exhibiting.

Rahul Mehrotra is the principal founder of RMA architects, based in Mumbai and Boston. He is the Chair of the Department of Urban Planning and Design and John T. Dunlop Professor in Housing and Urbanization at the Harvard Graduate School of Design. He has written and lectured extensively on issues concerning architecture, conservation, urban planning and design in Mumbai and in India.

Venugopal talks to Asher Ghertner about his book ‘Rule by Aesthetics’. The book talks about the role the state plays in everyday lives of the poor and how urban aesthetics often supersedes inclusivity in the Indian city. Asher contrasts the powerful influence in Delhi of property owning citizens as represented through the Resident Welfare Associations (RWAs) with the travails of the property less in the city, and their displacement from public land.

Dr. Asher Ghertner is an interdisciplinary scholar who uses the contemporary politics of slum demolition and urban renewal in India to challenge conventional theories of economic transition, city planning and political rule. He previously taught at the London School of Economics and is currently an Assistant Professor in Geography and Director of the South Asian Studies Program at Rutgers University. He is the author and editor of three books and has written widely on subaltern urbanism, environmental politics, aesthetic governmentality, property, and the uses and limits of gentrification theory.

Arul Paul talks to Anshuman Gupta on his book ‘Celebrating Public Spaces in India’ co-authored with Archana Gupta. The book explores the architectural identity and socio-cultural-functional strength of urban public spaces by analysing fifty vibrant landmark spaces from across the country.

Anshuman Gupta, co-founder of The Foundation of the Indian Cities, works as Vice-President, Head of Projects (South Asia), at Deutsche Bank AG. As an architect and an accomplished corporate real estate professional, he has travelled and worked across India. He is a strong proponent of the sustainable approach to design, and he spares time to research and write about urbanization and cities.