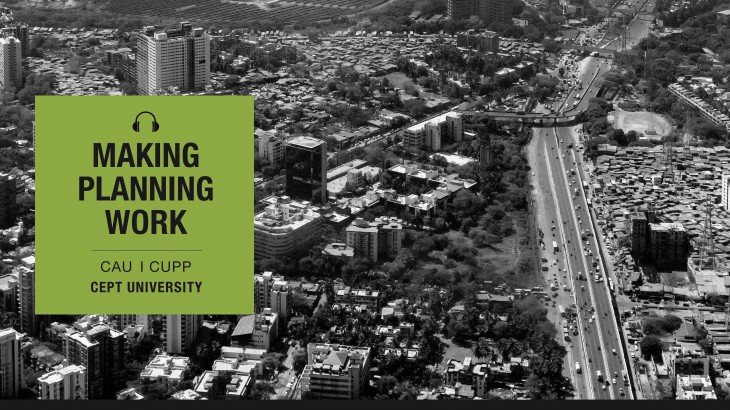 Dr. Bimal Patel, renowned urbanist, discusses with B.R. Balachandran, urban planner & collaborator of Dr. Patel, the need for a paradigm shift in the way we look at city planning in India.

Dr. Bimal Patel, renowned urbanist, discusses with B.R. Balachandran, urban planner and collaborator of Dr. Patel, the need for a paradigm shift in the way we look at city planning in India. They reflect on why city planning in India has been consistently ineffective for several decades and what it will take to change this situation.  Dr. Patel makes a case for a paradigm shift in our approach to urban planning.  The discussion unpacks the paradigm shift into several discrete aspects dealing with fundamental dysfunctions in the planning systems currently followed in most Indian cities.  Each of these aspects will be elaborated in subsequent episodes of this series.

Bimal Patel is an architect, urbanist and academic.  He is President of CEPT University.  He also heads HCP which is a multi-disciplinary design, planning and management practice based in Ahmedabad.  Bimal Patel's research focuses on architecture and urban planning, real estate markets, regulatory frameworks and land management. He has won numerous awards including the Aga Khan Award for Architecture (1992). In 2019 he was awarded the Padma Shri, one of India's highest civilian honours.

B.R. Balachandran is an urban planner with over 25 years of experience, currently engaged in doctioral research at the University of Illinois at Urbana Champaign. After 10 years at Environmental Planning Collaborative, Ahmedabad, in 2007, he co-founded Alchemy Urban Systems, a planning practice in Bangalore and also served in senior advisory roles at institutions such as CDD Society, BORDA and ITDP.  While engaged in research on post-disaster recovery in the US, he has continued to work on planning projects in India.

Planning the City for an Unpredictable Future

In this episode, Bimal Patel and B.R. Balachandran discuss why planning in India struggles to deal with the inherent unpredictability of the future. They look at how plans are excessively deterministic and why they take refuge in a "predict and provide" approach. Bimal argues that conventional plans delusively seek stable outcomes, while economies are always in flux. Such attitudes have been the primary reasons for dysfunctional cities. Later in the conversation, they explore a practical and meaningful approach to planning in the face of unpredictability, identifying the critical elements that need to be planned and others that need to be flexible.

In the third episode of their series of conversations on making city planning work in India, Bimal Patel and B.R. Balachandran discuss how urban planning in India needs to learn to work with a market economy. Bimal talks about the historical context in which planning in India adopted the approach of "providing what the city needs" and why that doesn't work. The discussants argue that the role of planning is to create a framework of rules for the market to operate efficiently. Planning should seek to provide only those goods and services that the market cannot or will not provide efficiently.

In the fifth and final episode of their series of conversations on making city planning work in India, Dr. Bimal Patel and B.R. Balachandran discuss why city planners in India are often resigned to not seeing their plans implemented despite numerous experiences to the contrary. They discuss  three important aspects of making implementable plans: (i) ensuring that plans are fair and equitable in distributing the costs and benefits of planning; (ii) working with the political process of planning, communicating plans effectively, engaging in dialogue and negotiating with stakeholders and (iii) focusing on raising resources for implementing the plans.  In the end, they recap the main elements of the whole podcast series.